The Wareham Town Band has been in existence since at least 1855, but virtually nothing is known of its earlier history. However, mention of the band is made in the Dorset County Chronicle on the 26th of July of that year, in relation to the annual Church School outing to Stoborough, when the band led the procession of carts carrying the children back to Wareham. Thus all we know is that the Town Band was formed at some prior date.
The Wareham Town Band has always contained a mixture of brass and reed instruments and still continues to do so to this day. This could possibly be an indication that the band’s roots lie in some earlier Village band but this is now a matter of pure conjecture. Certainly the Wareham Town Band predates many of the other bands in the Purbeck area, which were formed around the 1860’s as Brass Bands.
What information is to be gained at present comes from books such as Terence Davis’s “Wareham, Gateway to the Purbecks”, which contains several references and photographs of the band.
One paragraph in the book recounts the scene on the night in the early 1900’s, when the relief of Mafeking was being celebrated in Wareham. People gathered at the Town Cross where the Town Band, which included Mr Saint with his circular bass, were playing and marching around a blazing tar barrel in the middle of the road. Everyone was singing and dancing, when a Mr Thorne appeared with his gun and fired a round which “stopped the Town Hall clock for several days.”
A photograph dated to 1908 also exists, with most of the members names known. They include such local family names as the Whites, Orchards, Govers, Wellsteads and Gales, each of which had at least two members in the band at that time, and many others were related through marriage.
Records have been received covering the period from September 1935, when the band was reformed after a dormant period, to 1942, when it was disbanded due to many members being called up for the war. The band secretary at this time was Mr Arthur J Carter of Cow Lane and from the accounts to hand, he appears to have been very efficient and zealous in his efforts for the band.
The band certainly flourished during this period, even to the extent of entering section C of the National Band Festival held at Alexandra Palace in September 1938, but as only brass players were allowed to take part in the contest, the band’s clarinet players were reduced to a purely supportive role. Although the band did not win the section prize, all members enjoyed the day out and were all the better for the experience.
Wareham Town Band reformed after the war band and in 1948 the band members, with the support of the Mayor, Councillor Andrew Knowleman and the Aldermen and Councillors of the Borough, launched an appeal for £260 to equip members with uniforms. In addition to the donations received from the Aldermen and Councillors, the band members each contributed a weekly sum until the money was raised. The secretary at this time, Mr George Gover, appealed to the public for a generous response and stated “In return we promise to give the best music of which we are capable.”
With the rise in post war affluence particularly among younger people and changing forms of music there was a general decline of interest in brass bands in the very late 1950’s and early 60’s. Although quite a few of the old village Brass Bands “went to the wall” during this period, Wareham Town Band survived.
Through the years, the band has continued to perform for Fetes, Concerts and Civic occasions in the Purbeck area. The fact that it still does so is down to the dedication of the players who give freely of their time and talents to make the band a success.

Click on an image below to view a selection of old band pictures. 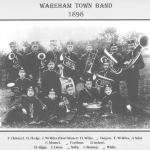 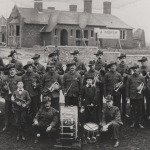 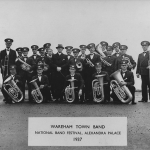 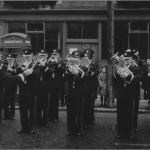 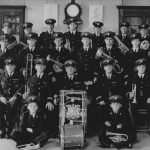 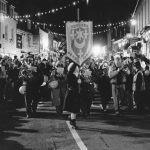 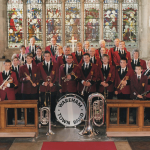 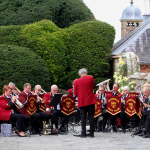 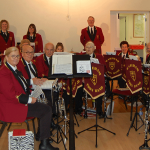